When I had short hair and my dressed coincidentally matched with a couch on a cruise ship i was on assignment on! 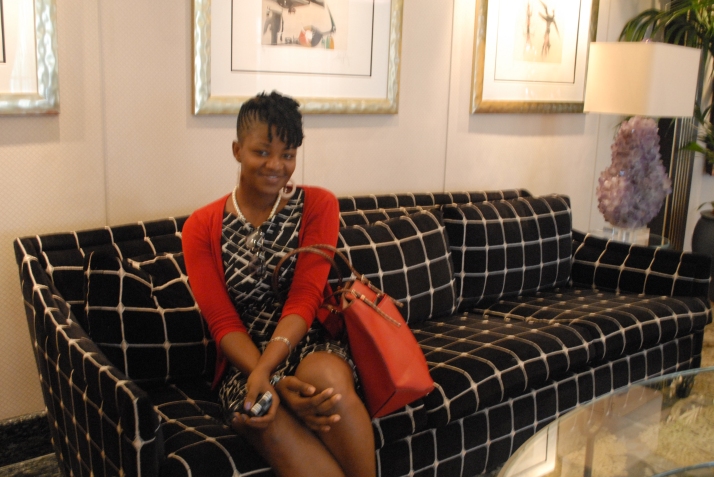 What? you’re disgusted by the topic of this post? Shame on you. Menstruation is real- this means all the pains, embarrassments and raging hormones that come along with it. 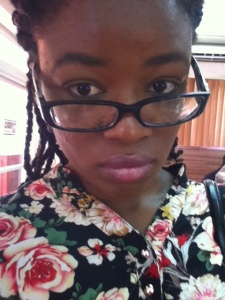 I woke up early this morning knowing I have a packed day and as such didn’t make any provision for folks messing with my time. 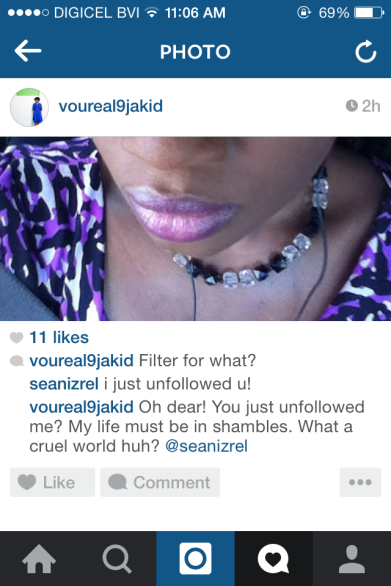 I got to my 9 a.m appointment and the guy wasn’t there. Mind you, I was there to photograph this group of guys as a favor. One would imagine they would bend backwards to accommodate me, but no, I had to be doing the bending. It’s 2015, I’m done with that, but I still managed to tap into my good side and scheduled another time with them.

Moved to my next appointment, which was scheduled to start at 9 a.m. I got there at about 9:30 and they were no where close to beginning.

To calm my nerves, I took a selfie and posted it on Instagram. (Yes, I’m sometimes vain like that. It has nothing to do with the fact that I feel beautiful today or anything to do with the purple wrap dress I have on. Thanks) Posted the photo and carried on with myassignment.

Got back to the office and saw instagram notifications. A number of likes and one comment. This comment was from a friend of mine in Nigeria informing me that he had unfollowed me.

My life instantly fell apart! How could he unfollow me, doesn’t he know my life revolves round instagram and the number of followers I have? How am I supposed to sleep at night knowing I have one less follower? How can he be this cruel?

I need to formally apologise to this guy for not following him back in the first place. I need to apologise for not finding his life and Instagram content interesting enough.

Life will never be the same until he follows me back!

I’m putting all my articles on hold until I rectify this issue.

So lately, I’ve been thinking of the idea of going vegan. I like the idea of doing without meat/fish.

I notice each time I eat mainly fruits and vegetables with little to no carbs, I’m full of energy and so active.

Let’s just wait and see how the next few weeks go.  Gradually making my way into the vegan life. ﻿ 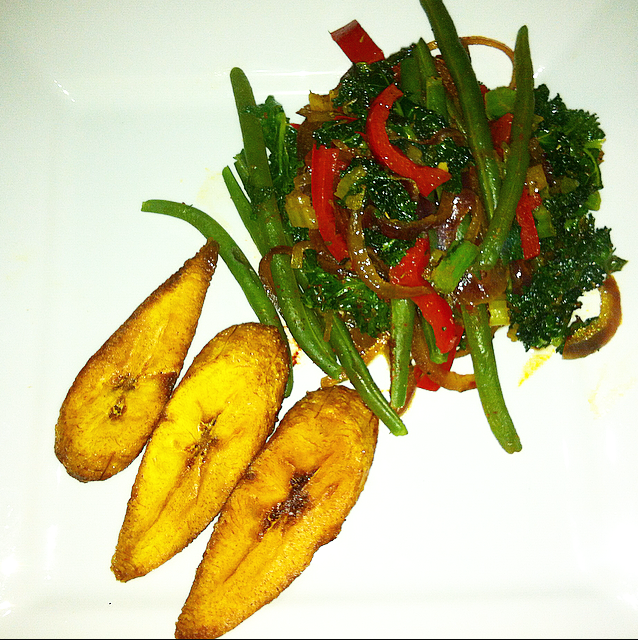 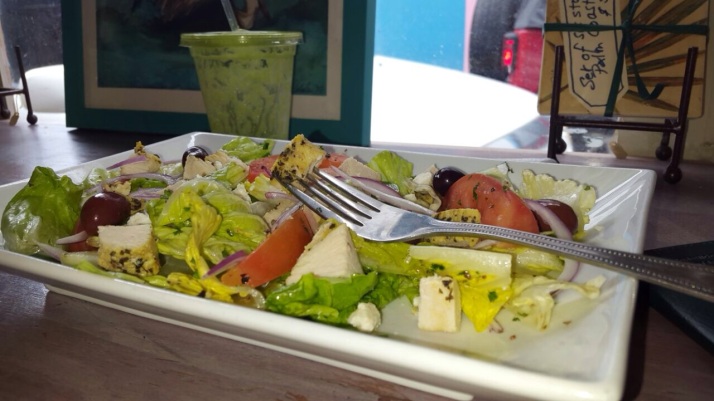 I just got robbed and I can’t even report the robbery to the police!

Calm down, I wasn’t physically hurt, but my wallet was. I don’t know if I can recover from such an act.

END_OF_DOCUMENT_TOKEN_TO_BE_REPLACED

Nah just kidding! I went to the beach on Saturday after a few months! I guess this of my take on Harsh Reality‘s a day in my life? I feel so blessed to live in a such a lovely place. Most days, I hardly take time to notice my surroundings. END_OF_DOCUMENT_TOKEN_TO_BE_REPLACED 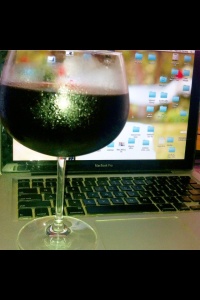 Hallelujah I’m not in Nigeria surrounded by the “You’re-next -aunties,” and I’m not attending any weddings where I’ll be constantly reminded of the need to get married. I’m only a few years below 30, but best believe this means nothing to those who think once you’re over 24 you should be in a marital home.

Anyway, that aside, I’ve just been thinking how boring and old I’m getting. I went to a magic show this evening and at the end of it all, I realized I barely laughed and I was very skeptical of the tricks that I couldn’t enjoy them. I’m sure younger me would have found those tricks really cool!  But at this age, I’m too old to believe half of that bullocks!

I came back home, showered and sat down to watch YouTube videos with a glass of Moscato.

Boys and girls, I’m sure my fellow unmarried mates are out there having a good time, possibly socializing with friends or even dancing. But no, I’m here watching The Ellen show and thinking of what recipe to try next!  Also, watching the show and removing “excess water” in my eyes looking at those feel-good features and gift givings on The Ellen Show.

(Dear Nigerian Husband, biko take your time, there are still a number of meals I haven’t learnt to cook yet. I don’t intend on having you eating out all the time)

Since Christmas, I notice I’ve been so domesticated. I’ve been cleaning more than usual, cooking and baking more and generally being a Martha Stewart.

I think the only thing left is for me to get some cats and rekindle my love for knitting, then start hosting tea parties!

Boys and girls, here’s a toast to being old at a really young age.

Sorry guys, it’s almost midnight, I should be asleep. I have to go to the gym in the morning!

So the receptionist at the office is a lovely looking 19-year old. She’s got an outgoing personality and is very fashionable.

I like to play big sister by listening to her and giving her some tough advice when it comes to boyfriends (if I were her, I won’t listen to me! Lol -I can barely keep a relationship and the Nigerian Husband has refused to show up! Poor child!)

So a few weeks ago, she broke up with her boyfriend. After listening to the whole break up ordeal, being the big sister I am, I condemned the guy for everything he did- it’s not that he’s cute and a really smart guy anyway! She deserves better! We cussed him out, called him names and all the things to make you feel good after a breakup!

With all that out the way, I tried to help her understand that there are certain things worth the wait and things that only get better with age ( do I really have to name those things?)

Now we’re on a mission to make sure she doesn’t repeat the same mistake when it comes to boys!

So this morning, I was at the reception with her when a guy walked in. She was dealing with a client so he left. Apparently he came specially for her. I noticed he had a paperbag in his hand. He brought her breakfast.

I asked about him and she said he likes her but she’s not into him and he’s not her type of guy.

Her type of guy she says, must have long hair and be light skinned.

For a minute, I thought she was being shallow, but then I stopped right there.  She’s 19, she shouldn’t be too serious when it comes to dating. Guys she should be dating right now are still growing themselves. They may not be able to afford taking her out to fancy dinners, they may not be the best when It comes to treating ladies right.

But oh to be young again! How I wish I had the luxury of being superficial when it comes to choices regarding men at this age.

I’m hoping I can convince her to sort of think about attributes than than physical features. This guy brought her breakfast, let’s see if he’s consistent. He just might be a good boy. I’ve seen him around and he looks like a decent kid.

We’ll see how this goes!

I’m blogging in my editorial meeting! Need to go before editor calls me out for being on my phone.